body language, diversity, inclusion, toxic workplace, workplace bullying, workplace harassment
Body language … 3 ways it might be working against you in the workplace 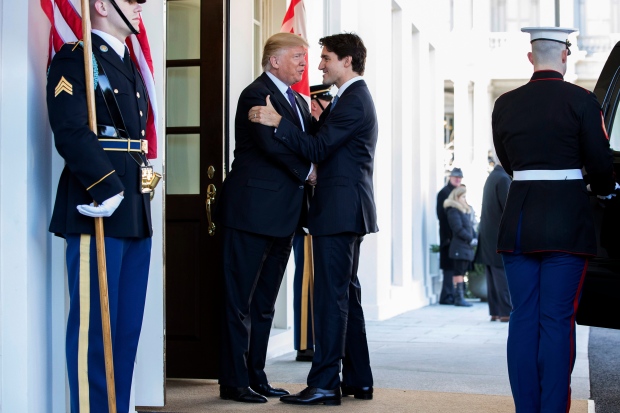 When President Trump had his initial meetings with foreign leaders around the world it became clear to me that not all handshakes are equal in intention. Normally, offering a hand is an attempt to be welcoming, or to solidify the closing of a deal, or at the very least indicate a formal goodbye. Evidently, a handshake can also be used to send another message … one that is far less friendly, and more about power, control, and intimidation.

After seeing President Trump’s aggressive handshakes a client said to me, “Something similar happened to me when I met a new manager who extended his hand to say hello and then squeezed extremely hard and had a steely glare in his eye. I got the message that he didn’t want to be sociable with me. Rather, he wanted to declare his role as a tough boss, or to use a childish expression, he was now the boss of me.” Anyone who’s experienced workplace bullying and/or a toxic workplace will recognize this dynamic (of course, similar patterns are evident in power/aggressive dynamics that play out in the personal realm).

That client’s comment stuck with me and I started wondering about how many other thinly veiled aggressions happen in the workplace … and how many people might be unaware that they may be affecting their careers with their body language.

It’s not a revelation that body language is an effective tool that demonstrates who we are and/or the message(s) we’re trying to convey. Sometimes, we are not aware of how much we reveal about ourselves when we assume certain postures. Sometimes, we may be sending out the opposite message than what we intended. There is no acceptable excuse for the workplace bullying that my client experienced. However, many people who enter their place of work might not realize that their mannerisms and body language are negatively impacting their work-related relationships and careers. 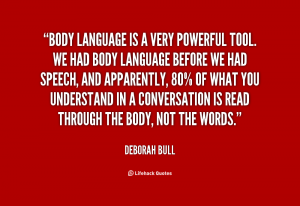 Face it, we have feelings and they show

You’ve heard the saying “I wear my heart on my sleeve.” Well, some people wear their thoughts on their face and this can betray them at work. In some workplaces, it’s wise to keep control of your facial expressions despite what you might be thinking. Although this sounds easy, it’s surprising how much can be revealed by a slight frown, tightening, biting, or pouting of the lips, clenching a jaw, or furrowing your eyebrows. This can happen when a boss or manager disrupts work schedules at the last minute, or during an intense meeting, or when trying to justify new decisions or policies. It’s often safer to try to express yourself without displaying too much emotion on your face. For example, when you’re dealing with frustration and/or disappointment try to soften the muscles in your face and mouth. Wrinkling up your forehead or allowing anger to rise will increase the chances of looking visibly angry.

Eyes are the window to the soul

Eye contact reveals much of what we feel. You can’t hide all your emotions and clearly, if you are sad or confused it is hard for that not to show. Frankly, I don’t believe that employees should be expected to act like robots around the office, but there are times when it’s prudent to hold something back in reserve. For instance, I understand that when an annoying coworker cranks up their favourite radio station (which is your least favourite station) right next to you it’s easy enough to dart a glare or side-eye in that person’s direction. Similarly, it’s hard not to roll your eyes when someone makes another tired and long-winded joke during a conference. Remaining mindful of your frustrations and other negative thoughts – and more importantly, keeping them in context should help you maintain a better, more constructive outlook. Try blinking (but not erratically) when you start to feel upset. Try not make the mistake of staring too fixedly on a person who is explaining something or interviewing you since that can make others feel uncomfortable. Also, avoid looking below, around, or over others while they are talking. That can send all kinds of the wrong signals such as boredom, paranoia, etc. 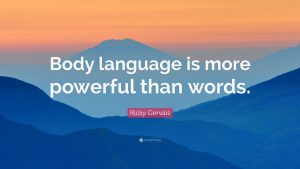 Walk the talk…but not too much

You’d be shocked by how little people actually pay attention to the words coming out of your mouth, especially if your body is distracting them. If you use your hands a lot to express yourself that can be a sure way to divert someone’s attention and prevent them from listening to you. Your body language can be your best or worst asset. Walking around too much during a speech or while making a presentation at the front of a boardroom makes you appear rushed and/or unfocused and it can annoy some of your audience. Avoid crossing your arms when someone is talking, particularly during an interview. This one action can make you appear insecure or rudely closed off to suggestions. When avoidable, try not to stand in front of or lean on someone’s desk since this can feel intimidating and unnecessarily authoritative. Leaning against a wall, a chair, or a desk can be construed as laziness or even sexually suggestive.

Have career or HR-related concerns? I invite you to contact me by email, phone, or via direct message on Twitter, Facebook, or LinkedIn if you’d like to discuss any of these topics in more detail.